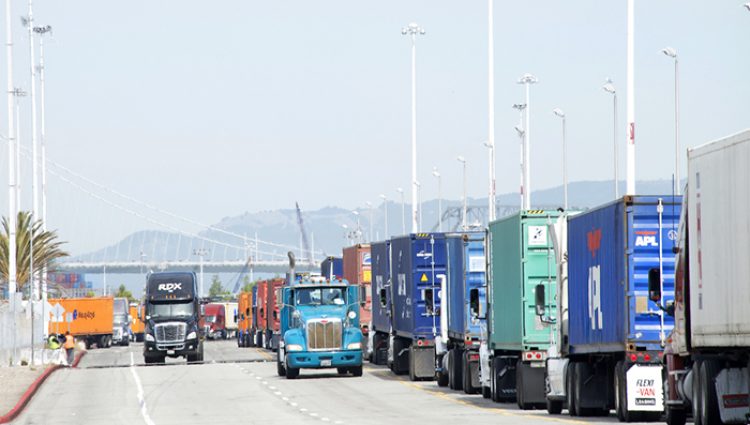 San Francisco, CA (November 13, 2014) – The Pacific Maritime Association (PMA) today issued
the following update regarding continued union slowdowns and work actions at the major West
Coast ports. The union actions are tied to the ongoing negotiations for a new coast-wide labor
contract. Negotiations began in May for the contract that expired July 1, and talks have been
occurring almost constantly for the past six months.
• Since October 31, members of the International Longshore Workers Union (ILWU) have
continued to work slowly in the ports of Tacoma and Seattle. Various reports have
detailed the dramatic impact these slowdowns are having at this critical harvest season
for Washington State apples, potatoes, Christmas trees and other perishable produce.
• In recent days, longshoremen on several shifts have walked off the job in Oakland,
shutting down their terminals for the remainder of the shift.
• In the critical ports of Los Angeles and Long Beach, where growing congestion has been
a recognized issue for some time, the ILWU continues to short-shift crews by
withholding qualified yard crane operators.
“These actions – slowing down, walking off the job and not sending the crews that are needed –
will continue to push the West Coast ports closer and closer to outright gridlock,” said PMA
spokesman Wade Gates. “With two weeks before Black Friday, the last thing our economy
needs is a shutdown.”
As a result of these developments, the PMA remains deeply concerned about the operational
situation at the major ports along the coast. The ILWU’s slowdown actions threaten West Coast
port competitiveness, and are complicating an already challenging holiday shipping season. In
the meantime, ILWU and PMA representatives continue to meet daily in contract negotiations.
>>>>>>>>>   Longshore Union Slowdowns Continue, 2
“For the sake of our economy, we call upon the ILWU to agree to a temporary contract
extension while we continue to work on a new agreement,” Gates said. “A contract extension
and a full return to work will give everyone – from shippers to consumers – the confidence that
is needed before the critical holiday shopping season.”

ILWU workers receive a compensation package that is among the most lucrative among all
blue-collar workers in the United States. Full-time workers earn an average of $147,000
annually in wages, along with a non-wage benefits package costing more than $82,000 per
active worker per year.

The ILWU benefits package includes fully paid health care for workers,
retirees and their families with no premiums, no in-network deductibles and 100 percent
coverage of basic hospital, medical and surgical benefits. Prescription drugs are covered for $1
per prescription; dental and vision care are provided to workers, retirees and their families at
little or no cost.